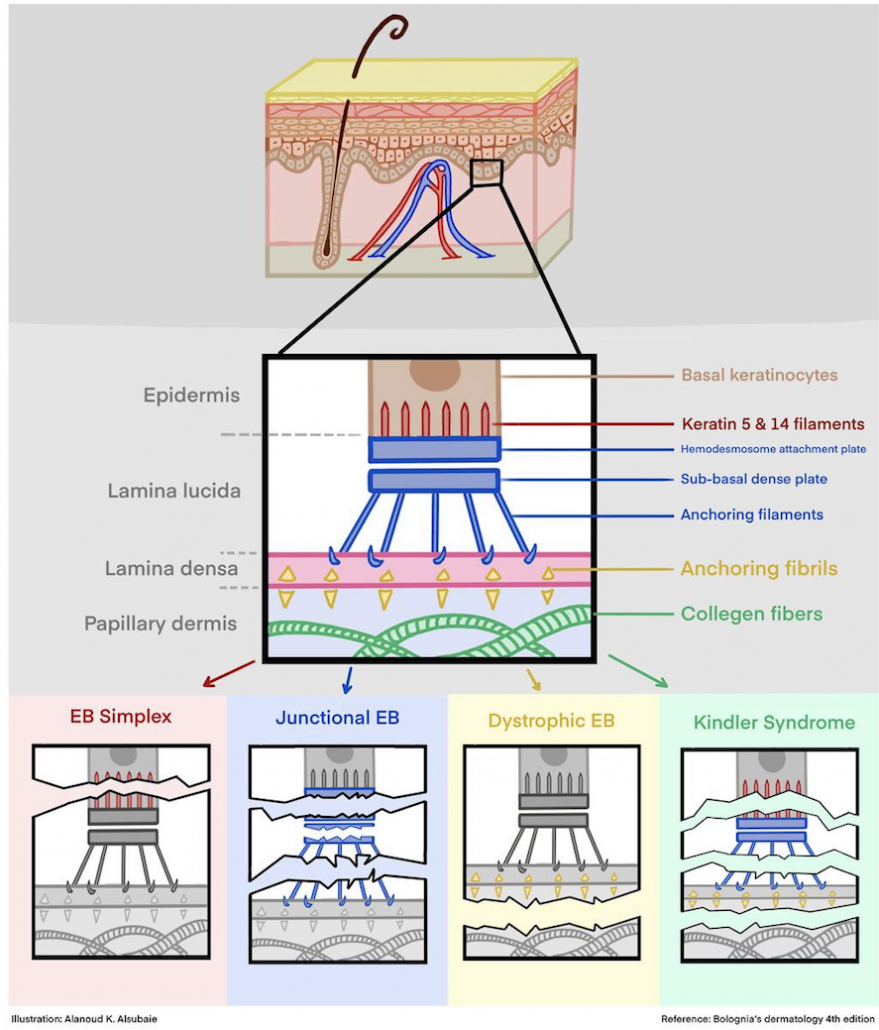 Epidermolysis bullosa (EB) is a group of genetic disorders characterized by skin fragility. Patients with EB are prone to developing blisters on their skin and mucous membranes. These blisters can appear anywhere, but most commonly on areas subjected to repeated minor traumas. In some subtypes, blisters may appear in internal organs leading to various debilitating complications. Unlike epidermolysis bullosa acquisita, which is autoimmune in origin, EB arises from a genetic defect in the molecules responsible for adhesion. Loss of adhesion is the main cause of blistering in EB.

There are four known types of Epidermolysis bullosa; EB simplex, Junctional EB, Dystrophic EB, and Kindler syndrome. Within each type there are various subtypes, and severity varies from mild to severe in each EB type.

EBS is usually inherited in an autosomal dominant manner, i.e. an affected parent could transmit it to half of his/her children. The genetic mutations in EBS occur in genes responsible for Keratin 4, Keratin 15, or plectin. The blistering in this type occurs in the epidermis layer, hence EBS doesn’t usually cause scarring. Blistering commonly involves areas that are subjected to repeated friction, such as the hands and feet. Moreover, EBS may be localized to the hands and feet or it may present in a generalized distribution, with relatively mild internal organ involvement.

JEB is inherited in an autosomal recessive manner, ie. the abnormal gene must be inherited from both parents, and 1 in 4 of their children could be affected. It involves mutations in the genes for Laminin 332 (formerly known as Laminin5), plectin, and a6b4 integrin. These are essential components of the junction between the epidermis and dermis. Blistering in this type occurs in the lamina Lucida within the basement membrane. JEB causes generalized blistering of the skin and mucous membranes with varying severity. It is usually life-threatening, the mortality rate is high— especially the generalized severe form of JEB.

DEB is classified into two major subtypes based on the mode of inheritance— Dominant DEB (DDEB) which is dominantly inherited, and recessive DEB (RDEB) which is recessively inherited. Both subtypes are caused by a mutation in the Type VII collagen gene. Blisters are formed in lamina densa within the basement membrane zone and the upper dermis. DEB causes generalized blistering of the skin and mucous membranes which leaves behind scarring and can cause severe disfigurement.

Kindler Syndrome is inherited in an autosomal recessive manner. It results from mutations in the FERMT1 gene; which is responsible for the production of Kindlin-1 protein. This protein plays an important role in the proliferation, cell-matrix adhesion, and migration of cells. In Kindler syndrome, there is a mixed pattern of blistering on multiple levels within and underneath the basement membrane. Blistering usually begins in early infancy, especially on the dorsal aspect of hands and feet. Patients with Kindler syndrome are at a high risk of developing squamous cell carcinoma.