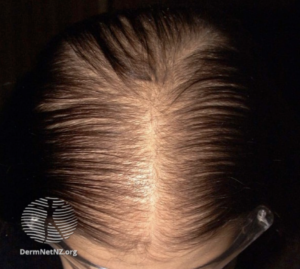 Female pattern hair loss (FPHL) is a type of nonscarring hair loss that affects mostly adult women. The disorder is marked by the loss of terminal hairs in the frontal and vertex regions of the scalp, resulting in an apparent loss of hair density. In contrast to many cases of androgenetic alopecia in males (male pattern hair loss), the loss of terminal hairs in afflicted areas is generally partial, and the frontal hairline is frequently preserved. This article will go through the pathophysiology, clinical symptoms, and diagnosis of FPHL.

The phrase “androgenetic alopecia” was once the most popular word used to describe the emergence of common, progressive hair loss on the frontal scalp and/or vertex of the scalp in both men and women. The terms “andro” and “genetic” denoted a hormonal etiology and a component of inheritance to the clinical presentation, respectively. As more research on hair loss was published throughout time, the phrase “female pattern hair loss” evolved to be the favored word for this kind of hair loss in women. This updated name reflects the absence of evidence to support a hormonal impact in all cases of the illness and helps to separate the distinct clinical aspects of this process in women vs males.

Hair loss across the frontal scalp and vertex of the scalp in FPHL is caused by a gradual decrease in the ratio of terminal hairs to shorter, thinner vellus hairs in the afflicted regions, a process known as follicular shrinkage. The duration of the anagen (growth) phase of hair follicles is reduced from a few years to weeks or months as a result of this process. Although hormonal variables and genetic predisposition are thought to have a role in FPHL, the mechanism by which these factors cause FPHL is unknown. The majority of women with FPHL do not have high amounts of androgens in their blood.

FPHL is a non-scarring type of hair loss that manifests as a gradual decrease in the density of terminal scalp hairs in a specific pattern. The principal areas of involvement are the frontal scalp and the vertex of the scalp. Although widespread involvement does occur from time to time, the occipital scalp is typically avoided.

The trend of hair loss differs from woman to woman. Frontal scalp thinning is the most apparent characteristic in some individuals, resulting in a “Christmas-tree” pattern when the hair is separated at the midline, but diffuse center thinning is the most prominent feature in others. Although women commonly have modest bitemporal thinning, the frontal hairline is typically preserved. It’s uncommon to observe a combination pattern that looks like male androgenetic alopecia (frontotemporal recession and vertex loss).

FPHL is not characterized by scarring, inflammation, or scaling. If these characteristics are present in a patient with hair loss, another scalp condition may be present alongside FPHL or may be the only cause of the clinical symptoms. FPHL is generally diagnosed clinically, depending on the patient’s medical history and physical examination. The presence of a reduction in hair density in the typical distribution, as well as an increasing incidence of miniaturized hairs, suggests the diagnosis. Biopsies of the skin are seldom done, although they might be useful when the diagnosis is unclear or a concurrent scalp condition is suspected. Several types of non scarring and scarring hair loss are included in the differential diagnosis of FPHL. Telogen effluvium, central centrifugal cicatricial alopecia, and traction alopecia are among of the more frequent illnesses having FPHL-like characteristics.

Because these cookies are strictly necessary to deliver the website, refusing them will have impact how our site functions. You always can block or delete cookies by changing your browser settings and force blocking all cookies on this website. But this will always prompt you to accept/refuse cookies when revisiting our site.