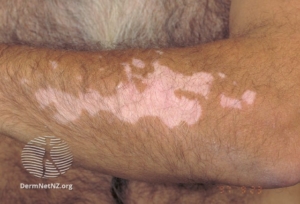 Vitiligo is an acquired disorder of the skin characterized by well-circumscribed macules or patches of depigmentation. Vitiligo can be cosmetically disabling, especially in people of darker skin. It is caused by destruction of melanocytes in the skin, which are essential for the production of melanin. The etiology is thought to be due to an autoimmune process, triggered in people with certain genetic susceptibilities.

Vitiligo can affect any part of the body, common sites are sun-exposed areas (face, neck and hands) and skin folds (armpits, groin). Vitiligo may appear following trauma to the skin, this is known as Koebner’s phenomenon. The pattern of depigmentation in Vitiligo is variable. It may affect a single patch of skin or it may involve multiple areas distributed throughout the body. Vitiligo lesions usually extend for a few months before stabilizing for variable periods. This cycle of pigment loss followed by stability of lesions may continue for years.

Vitiligo may be classified as segmental or non-segmental. In segmental vitiligo, there is usually a single patch of depigmented skin. This type also more commonly affects younger people and is more likely to be stable after the initial period of extension. Non-segmental vitiligo is characterized by lesions that are bilateral and symmetrical. Each of these types (Segmental and non-segmental) includes many other subtypes which are based on the distribution of lesions.

Vitiligo is typically a clinical diagnosis. Depigmented lesions are readily seen on Wood’s lamp examination. At times of diagnostic difficulty, a skin biopsy may be needed to rule out other possible causes of depigmentation. Blood tests such as thyroid function markers and Vitamin B12 levels may be ordered to check for possible co-existing autoimmune disorders.

General measures for the management of Vitiligo include preventing skin injury and wearing sunscreen. Specific treatment for Vitiligo may include topical medications such as steroids or Calcineurin inhibitors. Phototherapy is another option which aims at achieving re-pigmentation of the involved area. Systemic therapies for Vitiligo are available, examples include oral steroids, Methotrexate, and Cyclosporin. These all have immune-modulating properties and target the possible etiology of the disease. JAK2 inhibitors such as Ruxolitinib are currently being investigated for the treatment of Vitiligo and may be used in the future as a second-line medication. Depigmentation therapy may be an option for severely affected patients in whom other methods of treatment are not effective.

The elusive connection between vitamin D and skin healthAssociation of Psoriasis with the Risk for Obesity and Type 2 Diabetes Mell...
Scroll to top