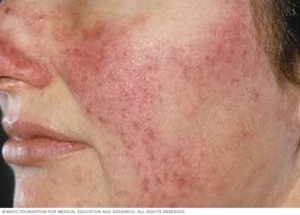 Rosacea is a common condition and one that dermatologists come across all the time. It is characterized by either transient or persistent facial erythema involving a chronic rash, sometimes accompanied with conspicuous blood vessels and protruding lesions.

Although the cause is still unclear, several hypotheses have suggested a multifactorial etiology, whether it be genetic, environmental or chronic prolonged exposure to ultraviolet radiation.

Rosacea is subdivided into four stages: First stage consists of episodes of flushing often frequent, followed by the second stage which comprise persistent erythema and dilated vessels (telangiectases). A minority develop the third stage, mainly manifested as papules and pustules. The fourth and last stage is Rhinophyma, a skin deformity appearing as large, bumpy red nose. It is seen more in men than in women.

Diagnosis is based on diagnostic phenotype, and it usually does not require an invasive investigation. Sometimes skin biopsies are performed to confirm diagnosis.

There is no available treatment that provides desirable results for the redness. Precautionary and preventive measures, prescribing sunscreen and avoiding exposure to heat. Oral antibiotic treatment is available, but its side-effect in the long run outweigh the calming effect. Topical treatment are as effective as oral, azelaic acid cream is efficacious at treating mild forms of rosacea.

Addressing Rosacea is a tricky task; the pathophysiology is still not fully understood and more research is needed to be able to target rosacea at the root cause. For the time being, lifestyle changes such as wearing sunscreen and avoiding excessive cold or heat have profound impact on the severity of the disease.

Association of Psoriasis with the Risk for Obesity and Type 2 Diabetes Mell... Microneedling: a new approach in dermatology
Scroll to top