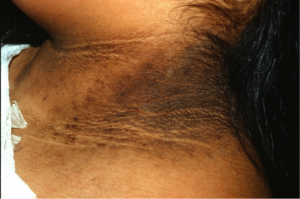 Diabetes mellitus is a disorder occurring when the body is unable to process glucose resulting in high blood glucose. It is a very common disease; it has been estimated that around 18% of the adult population in Saudi Arabia suffer from diabetes mellitus. There are 3 types of diabetes mellitus, type 1, type 2, and gestational. Type 1 occurs due to autoimmune destruction of insulin-producing pancreatic beta cells causing little to no insulin to be released. On the other hand, type 2 is due to insulin resistance rather than destruction of insulin-producing cells.

There are a couple of skin manifestations occurring in diabetics, and they are usually more common in type 2 than type 1. Furthermore, poorly controlled diabetes mellitus is associated with an increased incidence of skin infections and “diabetic foot”. Acanthosis nigricans (AN) associated with diabetes mellitus (benign AN) has an insidious onset and often described as velvety thickening and hyperpigmentation of the skin. Another disorder often associated with diabetes mellitus is Necrobiosis lipoidica (NL). NL lesions start as a papule that slowly develops into a well-demarcated plaque. A combination of peripheral arterial disease and peripheral neuropathy causes something known as “diabetic foot”. Patients suffering from diabetic foot have reduced sensation in their extremities, thus making them more prone to acquire undiscovered minor injuries that may later progress to full-thickness ulcers.

Diabetes mellitus is linked with some skin manifestations, we have briefly touched on a few of them such as acanthosis nigricans, necrobiosis lipoidica, and diabetic foot. Maintaining proper blood glucose and frequent foot care is important in the prevention of ulcers in the foot and infections.