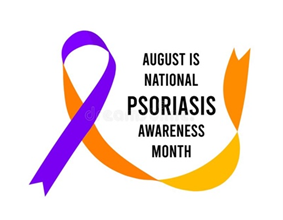 August is National Psoriasis Awareness Month, which gives us the opportunity to educate the public about it. The below article elicits some information about psoriasis definition, causes, presentation, and treatment.

Psoriasis is a dermatologic condition that makes the skin red, thick, and flaky. It is usually pink/salmon colored skin areas covered with silver or white scales. However, in darker skin tones, the psoriasis spots are purple, dark brown, or dark grey. It is mainly an adult disease, but it can develop in both children and adolescents. Both males and females are equally affected. It is not a contagious disease, because it is not an infection.

The exact cause behind psoriasis is yet to be identified. One of the important players in developing psoriasis is the immune system. The skin is made up of several layers; the top layer is the epidermis, and it has cells that divide rapidly and eventually die forming a layer of dead cells called the stratum corneum. In skin affected by psoriasis, immune cells enter the skin through blood vessels and cause the epidermis to grow very rapidly and to stop shedding properly.

The second player behind developing psoriasis is genetics. About 40% of people with psoriasis have family members with the disorder. Several genes have been identified to make people more susceptible to psoriasis. Some specific environmental and behavioral factors have been identified to be linked to psoriasis. Bacterial and viral infections, alcohol consumption, and some medications may affect the person’s risk of developing psoriasis or worsen the symptoms.

The symptoms of psoriasis include dry, red, or dark areas covered with white or silvery flakes. It can be on the scalp, elbows, genitals, or skin folds. It can be itchy or associated with skin pain. Joint swelling, pain, or stiffness. Nails can be affected too, and look pitted crumbly, or different in color. There are multiple types of psoriasis, however, the most common form is plaque psoriasis. It mainly affects young and middle-aged adults. Each skin plaque or spot is usually between 1-10 cm. It can appear on the scalp, elbows, knees, and back.

The disease course is usually lifelong as it is currently not curable. However, the severity of the disease can improve or worsen over time, and it is controllable by treatment.

Patients with psoriasis are affected emotionally as well. As people with the condition might feel embarrassed of their skin. They might get depressed or anxious. Working with a psychologist is often helpful.

The diagnosis is usually made by examining the skin, only occasionally a skin biopsy or scraping is required. The treatment is mainly to control the symptoms. It varies based on the severity of the psoriasis. It includes various topical, oral, or injectable medications.